Late last night Auntie delivered me back home to Mom! I was very happy to see my BamBam and Mom - and Virus came running to greet me. Mom was sad she didn't have a camera ready for that - looks like he missed me. :D


As for Virus upcoming romance - I don't really care. I just hope Virus doesn't go all modern and decide he'd like to be a single dad. I'm hoping he takes the one night stand-version and leave Våfflan to raise the babies!!


And since you've all missed me - here are a few more pix from our trip to Frognerparken. 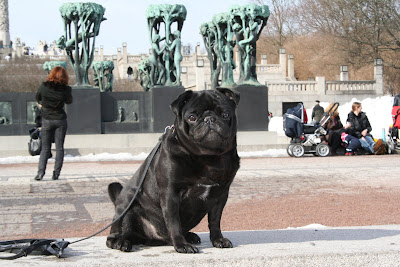 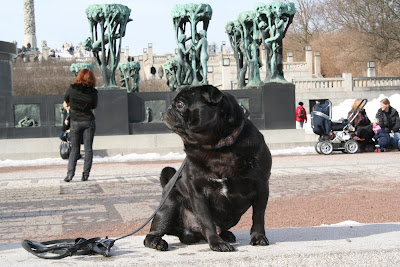 But then auntie Anna sneezed! So I just had to look around. And if you know pugs this is pretty funny - because.. well.. It's usually me that's the sneezer!

Uhm.. Some of you might remember that I'm sorta co-owned (this is not really the term, but we can't seem to find an English term for it) with my breeder. This really means that I belong to my breeder and just live with Mom and then after I become a dad my ownership will be transferred to Mom as thanks for her service. Like taking care of me is a JOB?? Oh well...

I'd like you all to meet my upcoming date - CH S*Lustans June Carter aka Våfflan (=the waffle.. MOL!) 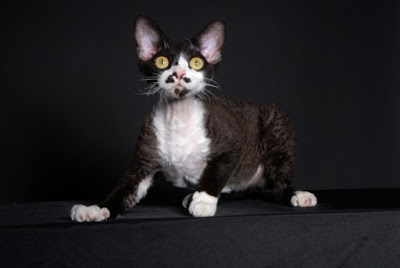 Isn't she just too cute? 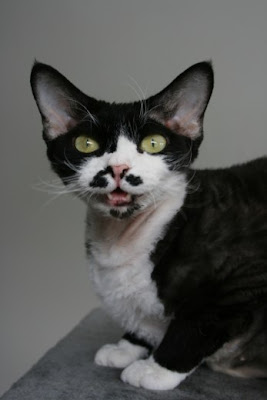 And apparently she's quite the chatterbox just like me.. MOL! I'm sure we'll get along great. You can see me and my date here http://www.freewebs.com/megamiaows/kattungerkittens.htm (My official name is (N) Mega Miaow's Rydiger). Our date will be sometimes this spring. I'm sure it will be great fun!

After Bajas left I've started to clicker train Mom! I'm working on teaching her to give me treats if I push her finger! Please excuse the lousy video - it's taken with Mom's cell phone while handling me, the treats, the clicker etc...

Saturday 28 March 2009 is the time for Earth Hour and we think all our friends in the blogosphere should join in! It's this very simple but effective idea - at 8.30 pm local time (wherever you are) you turn off your lights for an hour to vote against global warming and FOR our planet. The goal is for 1 billion people worldwide to join in! You can find out more at www.earthhour.org. We think it's a wonderful and simple idea.

Purrhaps you'll have to look a little more careful to find your toys (or enemies) but that's okay. Or just join up on the couch to cuddle. Tell your friends and family and be a part of this. It's pretty cool, huh?

I won't miss my annoying brother - but I'll miss you and your blogs and Mom!

Where am I going? One of my aunties was just begging for some puggy love so I'm popping over to her place for a week or so.

Bajas got to do his ego-trip yesterday, so today is all mine! Mom took pix of me, too you see! There's a reason for her need to photograph me - I'll tell you that secret later!

I like my very wide and evil-looking grin in this picture!

Sometimes you have to tippy-toe to reach the feather..

Being a model can be a bit boring at times - but I thought you'd all enjoy some shots of my handsome selves - and most of all my sweet Annie.

Virus tried to get in my pics, even though there are hundreds of pics of him.

Don't you think I'm just the handsomest puggieboy out there?

So - Sunday Mom took me and auntie for walkies. Here I'm at the bus stop. I'm pretty exciting. I love taking the bus!

Still snow, but it's melting!

A lot of people were feeding the birdies down there.

The monolith in the distance.

I'm sure a lot of you have been wondering why there are so few pictures of my pretty self lately. This is why: 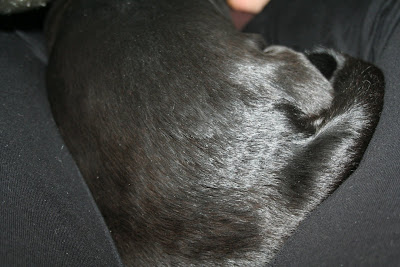 It's winter. It's chilly. I've gone into hiding. 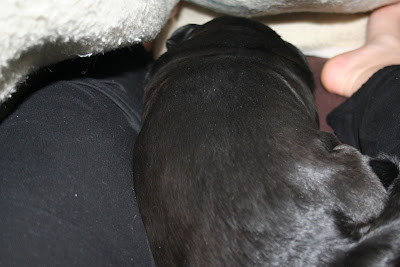 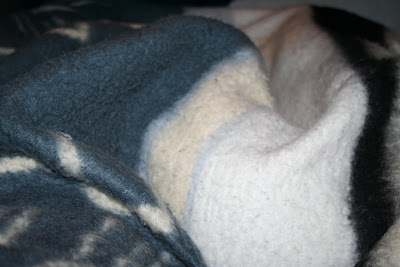 I'm just underneath a blanket.. and according to mom these are not the bestest pictures of me. Hahum... Mom and I are waiting or Auntie to call and say she's on her way, then we're heading off to this nice park for a walkie. The promised sun is threatening to hide behind wet clouds (did you know the Norwegian word for cloud is SKY. BOL!) and there might be rain today, but we're going never the less. And promise pictures!

Hi guys! Hope you all have GREAT weekends! Mom is promising us some fun! Here's a couple of pix of my stupid brother.. 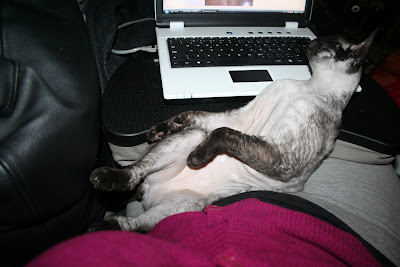 
But this one was new.. He'd have slid off the lap if Mom hadn't caught him.. I guess he's got complete faith in his servant... BOL! 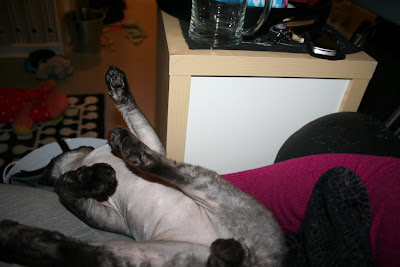 So - what's this exciting thing Mom is reading about in biology these days?

I was, of course, humbled when I heard that Campbell and Reece put in an entire chapter about ME in their Biology book. I'm unique and particularly beautiful/handsome/scary/awe-inspiring etc.. but I still was surprised they'd gotten around to writing about me quickly - but apparently my reputation travels fast.

Then Mom pointed out that it was not really about ME.. It's about viruses in general. I didn't even know there was a general form of me!? But apparently she was talking about a group of thingies that must have been named after me. Anyhow - I thought you would like to know a thing or two about my namesakes.

So here is Virus' guide to Viruses!

Viruses, unlike myself, are not alive - but they are able to replicate themselves (with a little help from a friend) so they're a bit of a borderline case. They consist of nucleic acid (we cats (and dogs and hoomans) have DNA, viruses can have either DNA or RNA) wrapped up in a protein coat.

They take various shapes, this one here is called a phage

I think it's the virus most like me because it's got a head and a tail, and so do I. He stores his DNA in his head.

I mentioned he needed a friend to replicate himself. You see - you need all sorts of tiny intercelluar gadgets and supplies to make protein (for new heads and tails and so on) and to make copies of the DNA to put into baby viruses.
So - when the virus encounteres a cell it's compatible with (you see - they're a bit spesific about what cells they want to interact with. Or.. they only know the secret code to be let into one or a limited kind of cell) it will send its DNA into the cell where the cells mecanisms will help it to make many more viruses. But the virus(es) isn't a very nice guest and will eventually make the cell die and fall apart releasing the baby viruses into the world. This is called a lytic cycle.
There is another option - and that is for the virus to sneak its DNA into the DNA of the cell allowing the cell to continue as usual. The cell will divide to make more cells when needed - and they will also copy the virus DNA into the new cells. This is called a lysogenic cycle. Sometimes if a cell is triggered in the right way the virus DNA will leave the cells DNA and bring the cell into a lytic cycle. This is for instance the case with herpes virus in humans, where you have occational outbreaks, but even when you have no symptoms the virus is still in your cells in that area.

Now I think that's about as much as you'd care to learn about viruses, huh? ;) But one more thing - when we're sick because of a virus - for instance the flu - the symptoms we feel are rarely related to the virus (destroying cells and all), but side effects of our immune system. The immune system is the good guys that step in to evict the virus and make us all better. :)

Oh.. and you get oh-so-cute virus toys! Mom so want some of these...
This is common cold:

You find the others here: http://www.thinkgeek.com/geektoys/plush/6708/images/770/ (thats where I stole the picture.. I'm a Virus too, after all, so I don't think they'd mind - with me giving them ad space and all).

Virus has a really, really long tail! (No, Khyra.. You can't floss with it!)

Mom's studies are going well, but we've all been a bit busy helping her out. And she's been sick for the last week so we've put all our energies into cuddling with her (well.. Virus just had to use some of his for his daily dose of destruction, but hey... the majority of it). She is on a particularly interesting theme in Biology these days (well, in her reading anyways, she tries to be a few weeks ahead of the lecture programme), and we'll get back to that tomorrow!

Letting the cat out of the bag...? 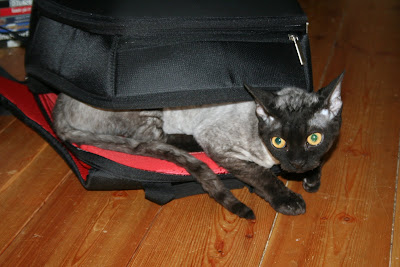 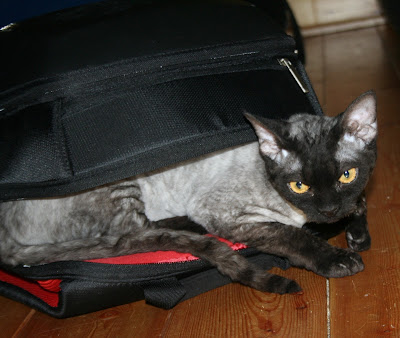 if he really wants to stay in there he should be allowed to!
Lagt inn av The WriggleButts på 19:34 11 comments:

Who are you? What are you? Are you trying to eats at my tail???

I can still seez you!

Hahahaha... Chicken... Hiding in the corner! 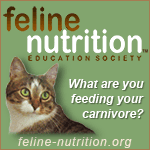